Ginger (Zingiber officinale) is a herbaceous perennial crop belonging to Zingiberaceae. The ginger plant takes its origin from South-Eastern Asia but has over centuries been introduced to various parts of the world.

Nigeria tops the table as the largest exporter of ginger in Africa. The country exports only about 7.2% of the crop in ground and non-ground forms.

Ginger is mostly sought after for its aromatic, pungent and hot taste. It can be consumed fresh, dried, powdered, or as an oil or juice, and is sometimes added to processed foods and cosmetics.

Ginger is grown in tropical and sub-tropical regions of the world for its spice and medicinal values. Possible health benefits include relieving nausea, loss of appetite, constipation, and muscle pain.

The plant produces erect, tall, and dark-green leafy shoot which measures about 30-100cm above the ground with long, narrow, ribbed leaves which are 15-20 cm long and 1-3cm wide.

The underground roots (known as rhizomes) are the most important part of the ginger plant.

The ginger plant can only attain all of its wonderful qualities, and produce large healthy rhizomes when planted in a properly selected farm site. The site must be free from stomp. It must have good irrigation system (if not rain-fed) and a well-drained soil.
Ensure you select a farm site where the plants get plenty of light but not direct sun, and enough protection from wind.

Shading is a vital requirement for ginger plant. Ginger can be grown with tall crops and crops that grow on poles. Although, it is also grown in large scale in open areas.

A good farm site for ginger farming must meet certain soil and climatic requirements, some of which are mentioned under the subheadings below.

It is very important to always carry out soil test for every land area you intend to grow plants on. This is because different plants have different soil composition that best support its growth. The NPK (Nitrogen:Phosphorus: Potassium) ratio, organic composition, water retention capacity, and the pH value of the soil are some important soil components to consider during soil test.

Ginger can be grown on wide range of soils, however, it thrives well in well-drained, friable, loamy soil that is rich in organic matter, and offer minimum resistance to rhizome development.

Ginger does not grow well in alkaline soil. It prefers mildly acidic soils. If soil is alkaline, adjust it to a pH between 5.5 – 6.5 using a garden pH kit.

Note that ginger is a rainforest plant, and if you think of rainforest situations, there is a lot of leaf litter. You can have leaf litter up to 10-20 cm thick, and if a plant has evolved under that sort of conditions, it’s going to need that sort of protection.

Mulching ginger with green leaves is essential to enhance germination of seed rhizomes, mulching also helps to control weeds. It helps to add organic matter and conserve moisture during later part of the cropping season.

Ginger requires a warm temperature between 30-35°C. It also requires a humid climate with rainfall of about 1500mm per annum, and no rainfall a month prior to harvest. Ginger can be cultivated both under rain-fed and irrigated conditions in areas having altitudes from 0 – 1500m above sea level.

Ginger is a root crop and the roots spread in diverse places in the ground with no specific direction. To enable easy harvesting of the crop, the land should be ploughed thoroughly, forming beds of about 15 cm high, 1-meter wide and of convenient length with at least 50 cm spacing between beds. Ridges formed at 40 cm apart should be used in case of irrigated farming.

Pasteurized animal manure (waste from poultry, cattle, pigs etc.) or compost manure should be added into the soil to enrich the soil.

Increased organic matter in the soil makes sense for ginger plant. Ploughing enhances aeration and enables the manure to go deep inside the soil where the roots can benefit from them.

The raised beds after ploughing should be solarized to check the spread of pests and disease causing organisms. Solarization is an environmentally friendly method of using solar power for controlling pests and diseases. This is done by covering the soil with a transparent polythene to trap solar energy. This energy causes physical, chemical, and biological changes in the soil. The polythene sheets used to cover the soil should be kept away safely after 30-45 days of solarization.

Planting ginger in rotation with maize also helps to control the spread of pests and diseases. A well detailed procedure for growing maize is explained here.

Ginger is cultivated vegetatively from its rhizomes. The vegetative propagation of ginger involves the following steps;

Buy fresh ginger rhizomes that are plump and free of wrinkles from a local store or from a farm.
Le the rhizomes to be propagated to develop buds. After that, cut them into smaller pieces using a sanitized knife. These pieces are called SETT. A sett is about 2.5-3.5cm in length. Each sett must have at least a bud. A sett with three or more buds have greater chances of sprouting. 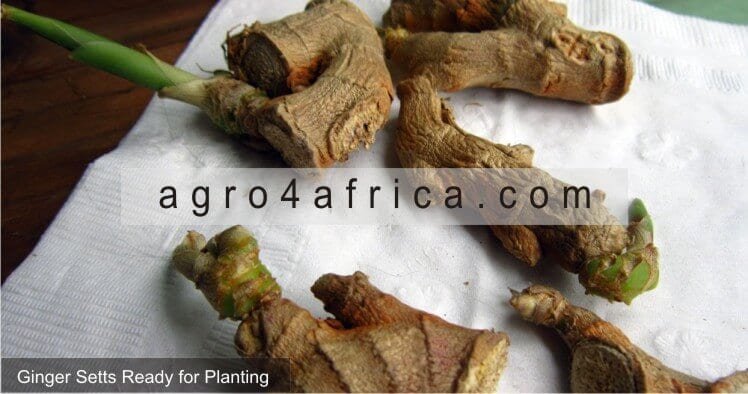 The sett to be propagated is usually stored in a dry location for a few days to heal. This enables them to form a protective thick hard skin over the cut surface which reduces the risk of infestation.

Ginger planting should be done late in the dry season, or early wet season as in tropical countries like Nigeria.
Each piece of ginger sett is planted 5–10cm below loose soil and 15-20cm apart, with the buds pointing upward.

Alternatively, you can dig up shallow trenches in rows, then place setts at a required distance in rows and earthen up to make ridges 15-20cm high.

Give the field a light irrigation soon after sowing. Mulch to conserve the moisture. Ginger needs a lot of moisture while actively growing. The soil should never dry out. However, do not over water, because the water that drains away will take nutrients with it.

The plant is harvested either by using mechanical pullers and diggers or by using manual labour where rhizomes are pulled and collected by hand.

Depending on the size of the operation and time of harvesting, the harvesting method may change from one farmer to another. Most large and medium scale ginger farmers adopt a mechanized approach to lift and collect rhizomes. Some medium and small scale farmers may lift the rhizomes mechanically and collect them by hand, while some may conduct the whole harvesting process manually.

After harvesting, Ginger is made available in the market in a variety of forms including fresh, dried, pickled, preserved, crystallised (or candied) and powdered or ground. Most commonly, ginger is processed into a dried form.